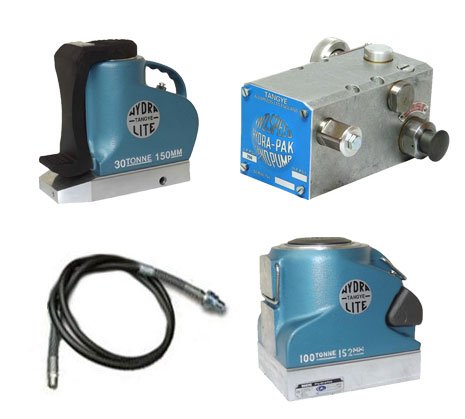 Service and Repair of Tangye Products, Jacks and Pumps

Hi-Press Hydraulics offer the full range of Tangye Hydraulic Equipment including, Lifting equipment, lightweight aluminium jacks and other products like Pumps, and Service Kits. Tangye Hydraulic products have a long history of excellence and have been used worldwide for lifting and supporting since 1856.

We offer Sales, hire, testing‎ and repair of a vide range of Hydraulic Equipment. Including Tangye Hydrapak Pumps, Hydralite, Hydraclaw and Hydramite Jacks. 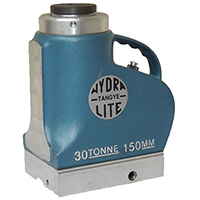 Hydralite Jacks from Hi-Press Hydraulics are designed to lift, lower, manoeuvre and position heavy loads with maximum safety. Hydralite Jacks are one of the most popular of the Tangye hydraulic jacks range, offering models with the capacity to lift 20 to 100 tonnes.
Hydralite Jacks 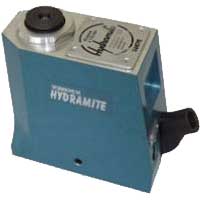 The powerful Tangye Hydramite Jack, available from Hi-Press Hydraulics, is capable of lifting 6.5, 10 and 15 tonnes. It is well proven in use, with thousands in use around the world. It is safe and reliable, with a relief valve to prevent overload.
Hydramite Jacks 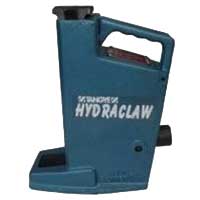 Hydraclaw Jack, is capable of lifting 5 tonnes on its head or toe. It is powerful, light and easy to transport, offering 178mm lift, low clearance at 41mm, stability and robust construction.
Hydraclaw Jacks 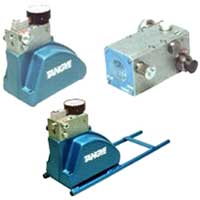 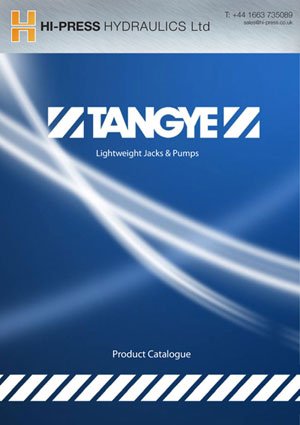 The History of Tangye

In the late sixties Tangye was sold to the Central Wagon Group who historically were known as ‘asset strippers’, after the purchase they decided to sell off the Cornwall site and they moved into premises in Birmingham, also occupied by the Shelly company who manufactured mechanical car jacks.

From this is was decided that all products previously manufactured were discontinued, and only the ship jack and aluminium jack manufacturing were retained.

The Central Wagon Group owned another asset known as Eric Peel & Co (better known as EPCO). They were the leading garage equipment manufacturer at that time and they supplied products such as trolley jacks, garage presses, and cranes.

Tangye and EPCO were then merged into one to become Tangye EPCO Ltd with manufacturing in both Birmingham and Leeds.

After some financial difficulties, Central Wagon was forced to sell to the Booker Group who wanted to diversify their business model. They had existing businesses in the Grocery and Publishing industry.

The group continued to manufacture from their Birmingham and Leeds branches. The ownership lasted 3 years before a management buyout by the Managing and Engineering Directors.

This arrangement was short lived as they sought help from the West Midlands Enterprise Board, who agreed to help and they proceeded appointed their own Managing Director.

From Birmingham to Accrington

Tangye then went on to be acquired by the Turner & Newall Group (also known as Hydratight). Hydrotight manufactured Hydraulic Rope Pullers and Torque Multiplier equipment. Tangye had a strong period of relative stability which attracted interest by the Allspeeds Group (part of the GEI group). In 1994 Allspeeds purchased Tangye and moved all the operations from Birmingham to Accrington.

The Allspeeds group already had ownership of three companies known as Variators, John Blake and Webtool (which was a direct competitor of Tangye). After a few years, the GEI group came up against financial difficulties and another management buyout was accepted to acquire the Allspeeds group.

All of the manufacturing takes place in the Allspeeds complex in Accrington, and Tangye is now the only aluminium jack range that Allspeeds manufacture (along with other branded products).

Tangye has endured a lot of mergers, de-mergers, and acquisitions but the name still lives on!

Enerpac products are distributed worldwide, through the convenience of local service and support.

The Enerpac company dates back to 1910, when the original company produced water pumps for Ford’s legendary Model T motor car.

Enerpac’s reputation as a technology leader began in the 1920s when the first hydraulic jacks were introduced.